I was less than halfway through the Dam Swim for Drew when I thought, “K is going to ditch me in the parking lot.” I had talked my friend K into driving down to Columbia for the two-mile race by describing my experience at the event last year. It’s a simple course: jump off a dock in Irmo, swim along the dam across Lake Murray, and get out on the beach in Lexington. When I swam it in 2014, it was an easy swim.

In open water swimming, however, conditions make a big difference. You can’t step (or jump off the dock) into the same lake twice. And the 2015 swim was not the easy swim I had promised K.

We should have known something was up when we checked in at registration. The woman behind the table asked for our names and then asked, “Are you swimming this morning?” It was a confusing question — why else would we be checking in? In retrospect, I think maybe people were checking in — and then bailing out.

This year, the water was choppy, much choppier than last year. And it was relentless; we were tossed around for the entire two miles. I overheard one swimmer say this was his fifth Dam Swim, and he had never seen conditions like this.

Choppy water requires you to swim differently. I saw many swimmers switch to breaststroke, allowing them to breathe more easily and see straight ahead. But I’m not enthusiastic about breaststroke, so instead I adjusted my freestyle, lifting my arms higher to clear the water. Because the waves were coming from the right, I breathed to the left for most of the race. That’s the advantage of being able to breathe on either side; I could take a breath without getting a wave to the face.

I breathed when I could, and I didn’t panic when I couldn’t. I held on and enjoyed the ride.

I like swimming in rough water. It’s a challenge. You put your head down, you pick your arms up, you think about Beowulf swimming five days and nights in icy water, slaying sea monsters all the way, and you swim.

As the race director assured us at the pre-race safety meeting, there was plenty of kayak support. And those kayakers were terrific. I had one herding me like a collie herding a sheep in the middle of the race and another steering me toward the finish line at the end.

I was tired by the end, and my time was nearly ten minutes longer than last year’s (and nearly nine minutes longer than my two-mile time at Lake Lure last month). It was a hard swim. But I placed about the same in the standings as last year, and I had fun. And while the first thing K said to me when we met after the race was, “You’re walking home,” he did drive me back afterward, so I guess it wasn’t that bad.

It’s hard to beat the feeling of accomplishment you get by jumping into a lake on one side and fighting your way to the other. 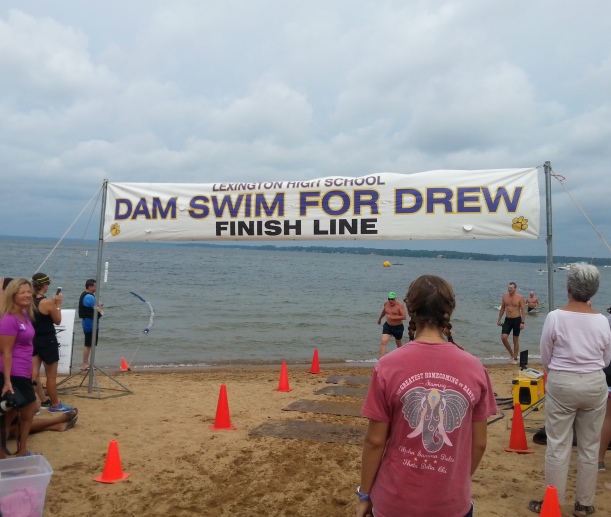 The Dam Swim for Drew is a great race. But it’s also a memorial for Drew Smith, an eleven-year-old boy who was killed by a drunk boater, and its purpose is to promote water and boating safety. Drew’s mother spoke before the swim, and she reminded us that small bad decisions can have huge bad consequences.

Drew’s parents lost their son eighteen years ago. He lives on in his family’s love for him and the good that is done in his name.

Announcing my Swim for HIAS! On November 2, 2019, I will start from the U.S. side of Lake Amistad (a lake on the Rio Grande), swim through the border to the Mexican side, and swim back. Click on the image for more info at my HIAS fundraising page!

Harnessing the Power of Swimming to Strengthen Communities