Successful open water swimming is dependent on three things: good preparation, good conditions, and good friends. And this year, at SCAR 2018, I had all three.

SCAR is a big event — four days, four lakes, 40 (or so) miles of swimming. My goal was to complete all four swims, and I did. To my surprise, I also won my age group. I trained well, we had great weather, and I had a team of people supporting me. 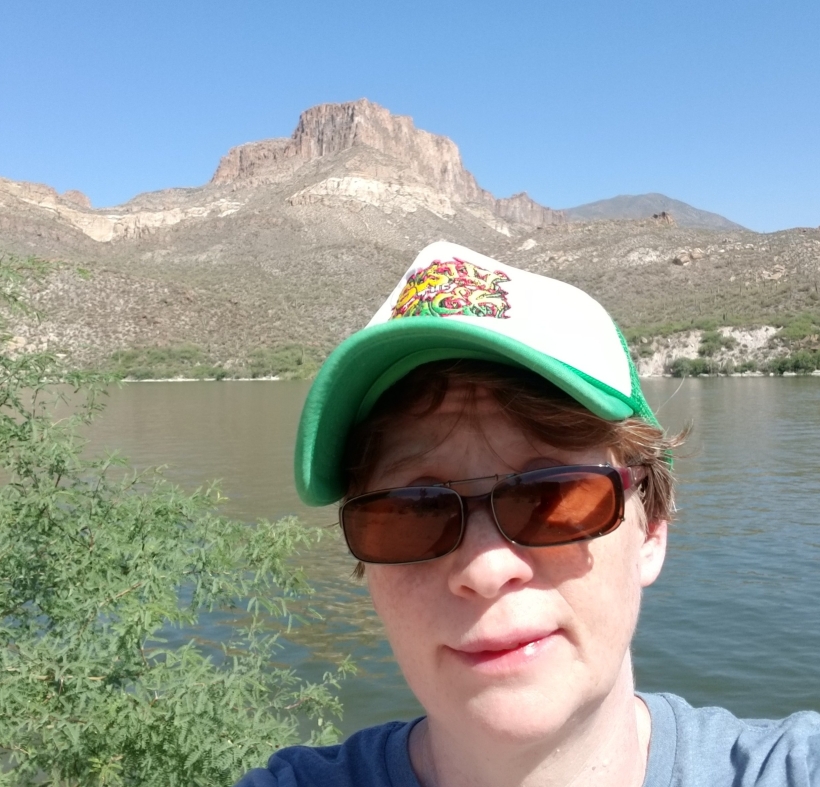 Selfie at Apache Lake, morning after the swim. My photo. April 2018.

The first three days of SCAR are dam to dam swims. The swimmers are divided into three waves (slower, medium, and faster), and boats take swimmers to the dam at one end of the lake wave by wave. All the swimmers in a given wave put one hand on the buoy line and one in the air, and we set off together. At the same time, the kayakers are paddling up from a beach nearby to join their swimmers. Each of the first three courses finishes at the buoy line at the dam on other end of the lake.

For me, the temperature at Saguaro Lake was perfect: 70 F (21 C). Another swimmer, a person who usually trains in the Pacific Ocean, told me she found it a bit warm. It’s all what you’re used to. But the sky was blue, and the wind was calm, and the nine and a half miles flew by.

The Saguaro course is made up of a canyon section, followed a more open section, followed by a second canyon section, and lastly two open miles to the finish. Knowing that structure in advance, I always knew where I was on the course. My favorite part was a tremendous gray rock wall on one side of the lake right before coming into the last open section. I gaped up in wonder as we swam along it. It was like swimming next to a skyscraper.

Saguaro Lake is billed as SCAR’s warmup. It was a good solid swim all the way.

Judging by the number of people who did not finish, Canyon Lake was the most difficult swim this year: 10 of 48 did not complete the course. The culprit was the cold. After the race, I overheard people saying that the water temperature was 57-58 F (14 C) at the start. Canyon is always the coldest lake, and it warms up as you go, but this year was colder than usual, and it took a good while to warm up.

All four SCAR swims are non-wetsuit swims, which is fine with me. I have no moral objection to wetsuits, but I don’t enjoy wearing them. But 57-58 F would be cold for me even with a wetsuit, though I know that for some ocean swimmers that’s just another day in the water.

I was not particular cheerful during the first three or so miles of the swim. My jaw clenched in the cold, and it ached. I was unhappy. But I was not afraid. This spring I started training in open water when the water temperature reached 50 F in the nearby lakes. The week before I left for SCAR I went out four days in a row, with three different friends who gave up their afternoons to come with me. So I had been in jaw-clenching cold, and I knew I could swim through it.

If I hadn’t had that cold water acclimation period — and all that help from friends — I don’t think I would have finished Canyon Lake.

During those first three miles, there was a lot of boat traffic on the lake, but I was too focused on my own misery to wonder what was going on. Later J, my kayaker (and my nephew), told me that those boats were pulling people out, but he’s a good man and a smart one, and he didn’t tell me that at the time.

Eventually the water temperature warmed up enough that my jaw unclenched, and I started to appreciate the stunning beauty of Canyon Lake. We were at the bottom of a twisting canyon for nine miles. As we moved along, I had the illusion that we were climbing up into the surrounding mountains. And when I looked down, the water was so clear that in shallower parts I could see my shadow moving on the bottom of the lake. I have long said that Lake Jocassee, my lake, is the most beautiful lake in the world, but Canyon Lake may be the other most beautiful lake in the world. 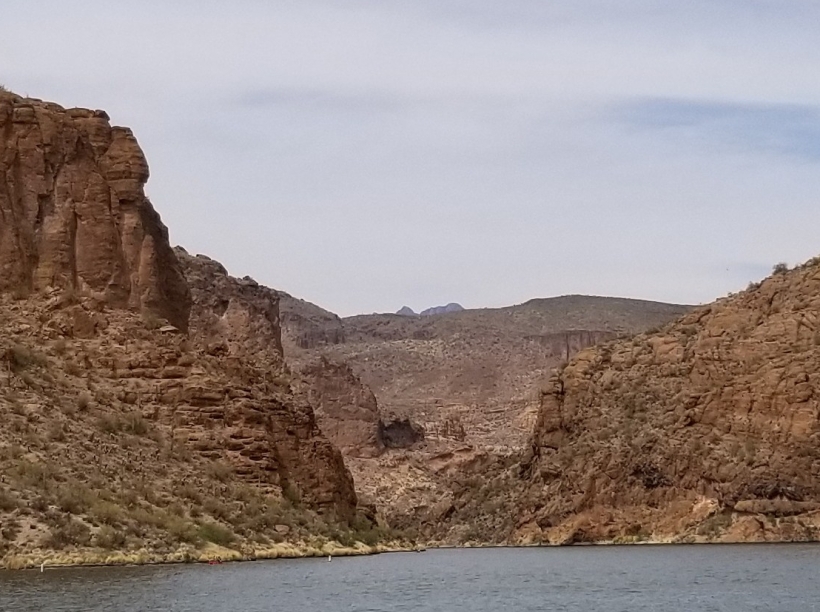 Canyon Lake, Tonto National Forest, Arizona. My photo, taken from the end of the course, looking back. April 2018

I wasn’t happy for the first third of Canyon Lake, but I’m happy that I swam it all the way.

This year’s SCAR was haunted by the specter of last year’s Apache Lake swim. I wasn’t there in 2017, but it was described to me enough times that I feel like I can see it: rough wind, cold waves, rescue boats going back and forth for hours picking up swimmers and paddlers from the 17 mile lake. Ten percent of swimmers who started Apache Lake in 2017 finished it — four people. One of those four finishers told me she went without food for two hours during the swim because if her kayaker stopped paddling even for a moment, he was blown backwards. And her kayaker told me that when they got to the end he was frozen in his seat, unable to talk or move.

But this year, the conditions were perfect. My only difficulty on Apache Lake was a problem of my own making: I forgot to put in my contact lenses.

If you are wondering how a person can forget to put in her contacts, read this paragraph; if you don’t care, you can skip it. It’s about my eyes, not my swimming. I have two problems with my eyesight. First, I am extremely nearsighted. I can’t see the big E on the top of the eye chart (in fact, I can’t see the eye chart). Second, I have complicated and atypical double vision. So, the first thing I do every day when I wake up is put on my eyeglasses for nearsightedness. If I’m not doing anything complicated, I can continue my day wearing those glasses. But if I am — especially if I have to drive a car — I put in my contact lenses, which correct for my nearsightedness, and then put on my second pair of eyeglasses, which correct for my double vision. I can function without double vision correction for a limited range of activities, like eating breakfast or folding laundry. On weekends sometimes I forget to put in my contacts because I can see well enough in familiar surroundings: when I have a pair of glasses on my face, I don’t necessarily think about which pair they are.

We were staying at a hotel at Apache Lake, having driven there the night before, and all I needed to do that morning was get ready, grab my stuff, and walk outside to the vans that would take us to the start. I didn’t have to drive. It wasn’t until we were eight miles down a dirt road and unloading the kayaks that I realized I hadn’t put in my contact lenses. There was no going back for them.

I froze. What would I do? But I didn’t take more than a second to decide. Of course I would swim. I’d come to Arizona to swim. My kayaker would be my eyes.

For seventeen miles, the world was a blur of color: blue above, brown to either side, green beneath. But I could see J’s red kayak beside me. That was enough.

Several hours in, J said, “I can see the end.” I said, “Don’t be ridiculous. There is no end. I will be swimming this lake forever.” But he was right; there was an end, and I finished the longest swim, Apache Lake.

The buoy line at the end of Apache Lake, Tonto National Forest, Arizona. My photo, taken after I’d gotten out of the water and put my glasses on. April 2018.

The night after swimming Apache, I slept twelve hours. I went to bed at 8 PM, slept till 5 AM, ate Breakfast 1, went back to sleep till 8 AM, and ate Breakfast 2. Then after packing up, I met J and ate Breakfast 3 with him, and we headed for the last swim, Roosevelt Lake.

Roosevelt Lake is big, and it only has one dam. The swim course starts from a boat dock, goes past a little island and around a peninsula, and then heads straight across open water to that dam. Of the four swims it was most like my experiences swimming back home in Lake Jocassee — with one important difference. It was my first night swim.

We began before sunset and swam about two-thirds of the 10K distance before the sun went down. Late afternoon wind made the conditions choppy. When the sun set, though, the water went still. The moon was almost full and the sky was clear. We swam under moonlight all the way in. 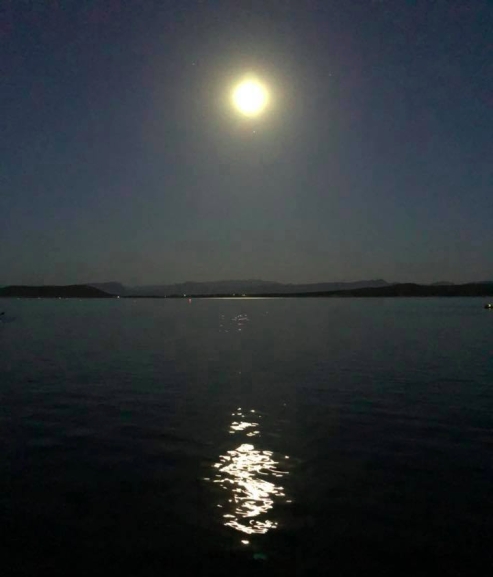 At SCAR I met people who have done absolutely amazing things. They swim with seals and sharks and jellyfish. They swim the English Channel and the Catalina Channel and channels I’d never heard of. I spent the four days in a state of awe at the stories I was hearing.

And all these incredible swimmers were free with advice and encouragement. People  went out of their way again and again to talk to me and to pat me on the back. Before I knew it, I was talking to people and patting them on the back. The camaraderie was infectious. Kent Nichols, the race director, and his team deserve a lot of credit for creating such a positive environment.

Open water swimming looks like an individual sport, but every swim is a team effort. I could not have completed SCAR without my team, the friends and family at home who helped me train and especially my family in Arizona who picked me up and drove me around, early mornings and late nights, who housed me and fed me and lent me equipment. J spent four days taking care of me, in and out of the water. He was my eyes. Thank you all.

The SCAR website claims, “After completing SCAR you’re ready for any open water challenge.” I think I am.

Announcing my Swim for HIAS! On November 2, 2019, I will start from the U.S. side of Lake Amistad (a lake on the Rio Grande), swim through the border to the Mexican side, and swim back. Click on the image for more info at my HIAS fundraising page!

“Life Is An Endurance Event”