Swimming is not a sport for shy people. There’s no way around it: if you swim you are going to be hanging out with other people while all of you are wet and nearly naked. Any kind of competition, pool or open water, involves meeting even more wet, nearly-naked people of all ages and shapes. If you end up at cold open water swims that permit or require wetsuits, you’ll soon be helping your fellow swimmers into them. And they will help you: the number of men who have zipped me up in back since I started open water swimming has increased enormously.

Swimming also involves physical contact. I don’t think non-swimmers realize it, but if you’re sharing a lane with one or more people, you will hit each other sometimes, even when everyone is practicing good lane etiquette and especially when they aren’t. I spent nearly three weeks in the fall of 2008 swimming in a wonderful pool in Dublin. I still dream about this pool; its ceiling was all windows, so you could do backstroke and look up at the beautiful Irish sky. But my last day I collided with a man in such a way that he bent my thumb right back. It was badly bruised, but there wasn’t much I could do. I was leaving in the morning for a three-week bus tour with 39 undergraduates, so I treated it with ice and alcohol and ibuprofen. My thumb ached for nine months after. I’ve had plenty of other bruises from practice, before and since, though none nearly so bad.

So, swimming is not a sport for the shy or the contact-averse. Nonetheless, it is also a sport that involves a lot of time in your own head, without distractions. I love swimming in beautiful places–I go out of my way to swim in beautiful places–but practice for me means a pool, and that means face in the water, following the black line at the center of the lane. If you ask a swimmer what’s she’s been up to, and she says, “Following the black line,” that means swimming, lots and lots of swimming. 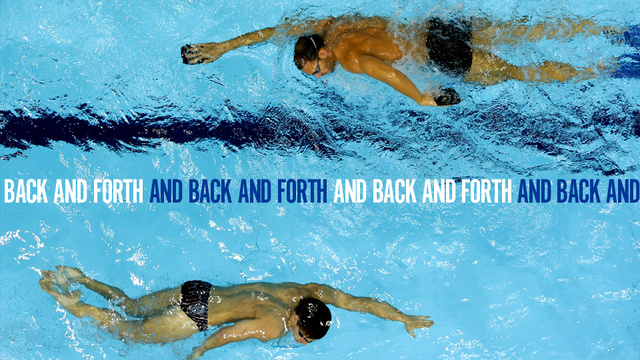 You’ve got to be willing to spend a lot of time with yourself, if you’re going to swim. Next post, I’ll talk about how.

View all posts by MJM

“Life Is An Endurance Event”